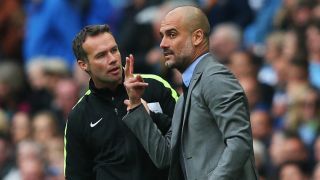 Mahrez converted a penalty in the second half but the strike was annulled and a free-kick awarded to the home side after he accidentally kicked the ball against his standing foot before it went in.

Guardiola was impressed that the official was able to spot the infringement and apply the law correctly, telling Sky Sports:  "Well done. It's the first or second time I've seen that in my life. We have to look after our boots."

Leicester boss Craig Shakespeare agreed that the decision was correct but claimed the penalty could have been retaken due to encroachment into the area from City players.

"To the letter of the law it's a double touch, but he could bring it back for an encroachment from Manchester City so there's a bit of injustice," Shakespeare said. "It's bad luck from our point of view. Two City players were in the penalty box."

: The referee was so brave in making the decision. I’ve seen that happen before, a long time ago! It’s not normal to see!May 13, 2017

The incident was one of a handful of controversies in the match, with Leicester players furious that City's opening goal was allowed to stand after Raheem Sterling swung a foot at the ball from an offside position.

Asked about that moment, Guardiola simply said:  "I don't know if Raheem touched the ball. The referee's never spoken about that. He's in his office, you can go and ask him."

"Once he makes the play of the ball, he becomes active," he said. "It should have been offside. He's really trying to block Christian [Fuchs] too."

The result puts City into third place and a top-four finish will be secured if they take four points from remaining games against West Brom and Watford.

"We have two games left and it was so important, against the last champions. When you play against them you understand why they were champions," Guardiola added.

"In the first half we were good and it was a shame to concede an amazing goal. Everything happened in the last 10 minutes.

"It's not easy to win games in a row. Now we rest for Tuesday."