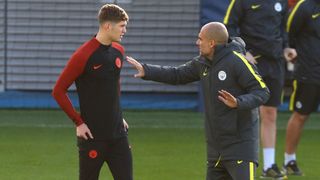 Pep Guardiola has likened John Stones to Gerard Pique and believes Manchester City are lucky to have the centre-back at their disposal after he came under scrutiny during the international break.

Stones became the most expensive defender in Premier League history when he joined Guardiola's squad from Everton in August and has largely impressed during the opening weeks of his career at the Etihad Stadium.

Criticism of the 22-year-old's tendency to overplay in tight spots resurfaced when an ill-judged backpass allowed Nathan Redmond to score in a 1-1 draw with Southampton last month and Stones found himself under the microscope again when England faced Scotland and Spain over the past week.

On more than one occasion, Stones' decision making landed team-mates in trouble during the Wembley matches, prompting renewed debate over whether he should be forced to change his playing style.

This is certainly not something Guardiola will entertain and he believes Stones can become a towering influence for City, as one-time Manchester United defender Pique was in his all-conquering Barcelona sides.

"It is difficult for me to find in that age one player with this personality, this special quality," he told a news conference ahead of Saturday's Premier League trip to Crystal Palace. "It is difficult to find it in the past and now in Europe and in the world.

"Sometimes you have to help him to understand when he can do some kind of thing and in some moments he cannot do that.

"Remember, Gerard Pique when he started was quite similar. Gerard came here in Manchester and was playing not so often. He needed to grow stronger.

"I like to work with him a lot because he tries to improve, he recognises his mistakes. He knows he can be better but he is always available to help the team.

"The way he wants to play is special. As a central defender he is strong in the air and defensively he has good qualities as well.

"Especially he has the quality and the personality to play with the ball. To play in the big clubs, the most important thing is not to be afraid.

"That is why I think Manchester City is a lucky, lucky club to have this player."

Glenn Hoddle accused Guardiola of being over-indulgent with Stones after his patchy showing in the 3-0 World Cup qualifying win over Scotland last Friday and City's boss wryly suggested the ex-England manager might have a point.

"I agree with him, I am so nice with [Stones], so nice," Guardiola smiled. "And I'll keep going on that.

"With John, we cannot forget he is 22 years old and always in his career he played one game a week. Now immediately he plays three games a week in places like Camp Nou against Messi.

"Of course he has to improve, not [only] now but in the beginning when people said 'Wow! How amazing is John?'

"He has to make a lot of mistakes. I will [deal with] this in the nicest way as possible, that is sure."