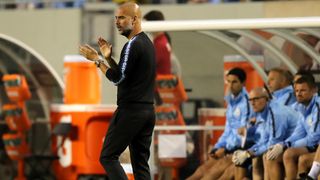 Manchester City manager Pep Guardiola said there were plenty of positives to take from the club's International Champions Cup defeat to Borussia Dortmund.

An undermanned City kicked off their pre-season with a 1-0 loss against German side Dortmund at Soldier Field in Chicago on Friday.

Mahrez – a £60million signing from Leicester City – showed glimpses of his quality for the Premier League champions, almost equalising via a free-kick on the stroke of half-time after Dortmund's Mario Gotze converted a 28th-minute penalty.

"Of course, we prefer to win the game but we know what is going to happen in pre-season," Guardiola told reporters. "We had just one week or ten days together – most of the team played together for the first time.

"It was really good for their futures because we played one of the best teams in Germany and we did many good things. We spoke during this week and the courage, intensity and desire to play was very good. I'm so satisfied with the guys.

"In some minutes, we started well. After, we had a few problems. We missed the ball in some situations and they used the counter-attack.

"I saw many good things. Luke Bolton is a winger but played at right-back today for the first time. He won all the duels against Jadon Sancho and these players – he did it really well.

"Douglas Luiz was with us for the first time and Jason Denayer is a right-footer, who played on the left. Eric Garcia is 17 or 18 and played like he is 24 or 25 and Riyad played good in his first game.

"It will be a good experience for them [the young players] to realise they can compete [at senior level] and play well. That is the most important thing in that period and then as soon as people come back, we will know what we need for the first games against Chelsea and Arsenal."