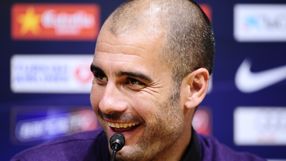 Defending the European Cup has proved a difficult task for holders over the last few years, and the 2009 winners go into Wednesday's Champions League last-16 home second leg against VfB Stuttgart with their tie finely balanced at 1-1.

"It's a marvellous challenge to try and be one of the best eight sides in Europe and to emulate Manchester United, who last year became the only recent champions to make the quarter-finals the following season," Guardiola told a news conference.

Barca went on to beat Alex Ferguson's United side 2-0 in the final in Rome last May.

"Of course, it is possible the same could happen to us, this is a great competition," he said.

"It's a warning. We could lose but it would have been impossible for us to achieve the titles we did last season if we had under-estimated our opponents."

Earlier, Barca midfielder Sergio Busquets said it was important for the Catalans to stick to the attacking style that had brought them the title last season.

"Above all we have to be ourselves," the Spain international told a separate news conference.

"That is to say, focus on everything that made us the reigning champions. Keeping the ball, playing as a unit and most importantly creating goalscoring chances."

Stuttgart coach Christian Gross said Russian side Rubin Kazan had shown the way forward for all visitors to the Nou Camp, after they surprised Barca 2-1 there in the group stages.

"Rubin scored a goal in the first minute and this always gives you a lot of confidence," Gross said.

"It surprised everyone that Rubin could beat Barca at the Nou Camp. This proves nothing is impossible and gives us hope that we can qualify to the next round."

Gross added that former Barca winger Aleksandr Hleb had trained normally and would be available on Wednesday.