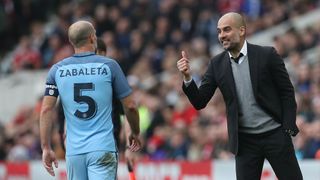 Pep Guardiola has heralded outgoing full-back Pablo Zabaleta as one of the most important players in Manchester City history.

City announced late on Saturday that Zabaleta had informed the club he will leave when his contract expires next month, bringing down the curtain on a celebrated nine-year spell in Manchester.

An unheralded signing from Espanyol in August 2008, shortly before Sheikh Mansour's takeover drastically altered City's fortunes, Zabaleta made his Premier League debut alongside showpiece signing Robinho in a 3-1 defeat to Chelsea the following month.

But it was the tough-tackling Argentinian who would go on to firmly establish himself as a fans' favourite thanks to numerous all-action displays.

A pivotal member of the title-winning sides of 2011-12 and 2013-14, Zabaleta also collected an FA Cup winners' medal and two EFL Cups during the club's resurgence as a trophy-winning force this decade.

Despite being reduced to a more marginal role under the current manager, the 32-year-old's significance is not lost on Guardiola ahead of what is likely to be an emotional farewell to the Etihad Stadium against West Brom on Tuesday.

"Hopefully all the fans can come to support us – we play for a lot of important things – and to express gratitude for one of the most important players in the history of Manchester City," said the former Barcelona boss, before acknowledging Zabaleta will be tough to replace over the course of what promises to be a busy close season.

"I have a lot of respect for people players and managers who do what they do for a lot of time. Nine years here is incredible and to replace that you need someone to stay here nine years.

"His impact here was amazing. He was one of the first players [of the current squad] to come here and he has helped the club to where it is right now."

Battling together for 9 years. Massive respect to . True warrior and Man City legend. May 13, 2017

That transformation, to which Zabaleta has been integral, means a trophy-less season and a battle to secure Champions League qualification running into the final week of the campaign must be considered a disappointment at City.

Victory will all but assure they retain their spot in Europe's elite competition for a seventh consecutive season, but Guardiola expects no favours from a Baggies side who made Chelsea work hard for a title-clinching 1-0 win at The Hawthorns last Friday.

"They are professionals, they will play to win," he added.

"Tony Pulis' teams don't play thinking it doesn't matter. It's a real final for us, and we are going to be ready."

John Stones is poised to return from an adductor problem that has sidelined him for the past five weeks, although Guardiola does not expect midfielder Fabian Delph to feature again this season due to a leg injury.