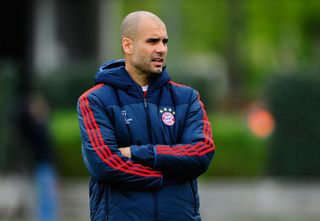 Vilanova, who was Guardiola's assistant at Barcelona, passed away on Friday after losing his long-running battle with throat cancer.

Guardiola was visibly emotional during his side's 5-2 Bundesliga win over Werder Bremen on Saturday and spoke of his deep sadness at the passing of the 45-year-old former Barca coach.

Speaking after the game, Guardiola told reporters: "Tito was more than a friend. It was difficult to focus on the game today.

"The sadness I feel for Tito will accompany me for my whole life.

"From here I want to send my deepest condolences to his family. We lived through a lot together.

"We won together, we lost together. This is difficult for me and for everyone.'

Vilanova led the club to the Liga title last season, though his tenure was heavily interrupted by his illness.

He was diagnosed with throat cancer for the second time in December 2012 and left Camp Nou after just a season in charge to undergo treatment.