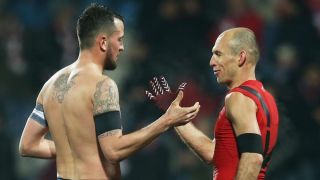 Pep Guardiola was relieved to come through a "difficult game" after Bayern Munich recorded a 3-0 win over second-tier Bochum in the quarter-finals of the DFB-Pokal.

Robert Lewandowski scored twice either side of a goal from Thiago Alcantara as the Bundesliga leaders kept alive their hopes of securing the treble.

However, Guardiola was also quick to praise brave Bochum, who held their heavyweight opponents at bay until the 39th minute.

The 2.Bundesliga side were also forced to play the entire second half with only 10 men following the dismissal of substitute defender Jan Simunek just before the break.

"We are obviously delighted with the semi-finals. Congratulations to my team," Guardiola told the club's official website.

"My compliments also to Bochum. We talked a lot with the players and we knew that it was a difficult game.

"After the penalty and the red card, we had more control in the second half."

Lewandowski - who broke the deadlock with a low shot before adding Bayern's third just before the final whistle - echoed the sentiments of his manager.

"Until the first goal, it was not so easy. Bochum played very well," he said.

"In the cup, it is always dangerous as long as the score stands at 0-0."

Bayern will host Werder Bremen in the next round of the competition, while the other semi-final sees Borussia Dortmund travel to Hertha Berlin.