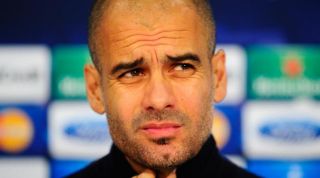 Former Barcelona boss Guardiola was mooted as a potential successor to Alex Ferguson before the Scot's retirement last May.

And, following Moyes' departure, some sections of the English media had speculated that United would enquire as to the possibility of the Spaniard leaving Bayern less than a year after taking over at the Allianz Arena.

However, Guardiola, who guided Bayern to a 4-2 aggregate success over United in the UEFA Champions League quarter-finals earlier this month, has quashed any talk of a move.

Speaking ahead of Bayern's Champions League semi-final first leg with Real Madrid, Guardiola said: "I'm with Bayern and I want to stay for two more years.

"I need more time to feel this is my team. I still have more work to do."