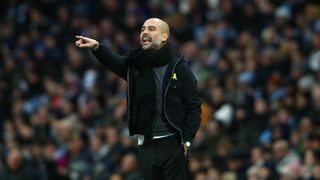 Pep Guardiola says the EFL Cup is as important to him as any of the four trophies that Manchester City are seeking this season.

The runaway Premier League leaders - 15 points clear of Manchester United - take on Bristol City on Tuesday in the first contest of a two-legged affair.

Lee Johnson's Robins stunned Jose Mourinho's United in the last round, although City appear an altogether different proposition, having gone unbeaten in domestic competition so far this season.

Their latest triumph was a 4-1 win over Burnley in the FA Cup third round on Saturday and Guardiola says City must begin hoarding silverware if they are to earn a lasting reputation to match their stellar form this term.

Quizzed on the competition's standing in his thoughts, Guardiola said: "So important – a win helps to win more.

"To become a big club like the teams I've faced, or United or Liverpool with their history, you have to win.

"It is nice to have good performances but you have to lift the titles. It's important and we're going to try.

"Nobody can take away what we've done so far. But I think it's a big mistake just to be happy if you win [games]. We have to lift titles in the future - without them it's not enough.

"We're going to try to win the game against Bristol City and take the best result there - that's the only way I know."

Despite his bullish ambitions, Guardiola remains insistent that his side must not look towards a potentially glittering end of the season before trophies have been secured.

"From my experience in Barcelona when we won the treble, in January you cannot talk about it, it's unrealistic," he said.

"In sport, the most important thing is what's next - visualize, focus on what's next. If you look far away, it's a big mistake."