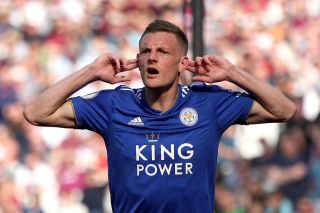 Pep Guardiola is wary of the threat of Jamie Vardy as Manchester City prepare to host Leicester in a crucial clash on Monday.

With City’s title battle with Liverpool going to the wire, Guardiola’s men need to win at the Etihad Stadium to return to the top of the Premier League and retain control of their destiny.

They face a man in fine form in Foxes striker Vardy, who has taken his goal tally for the season to 18 with 11 strikes in his last 11 games.

Guardiola has also witnessed at first hand how dangerous Vardy can be. The former England forward claimed a hat-trick when Leicester overpowered City 4-2 at the King Power Stadium in Guardiola’s first season in England in December 2016.

Guardiola said: “I think his career speaks for itself – not just the last few games – but (lately) he’s scored every single game.

“He’s done incredible in this league. He’s an incredible striker with his movement, finishing, fighting.

“I think before they were a counter-attack team but now with Brendan Rodgers they have another way to play, and they can use that and control all parts of the game.”

City will again be without Kevin De Bruyne, who has missed the last two games with a hamstring injury. Midfielder Fernandinho is a doubt with a knee problem.