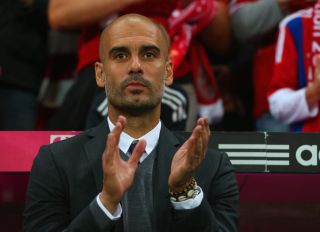 Thomas Muller put the home side in front eight minutes before the break at the Allianz Arena and Arjen Robben doubled the advantage just after the break.

Ivica Olic curled home a wonderful effort in the 52nd minute to give Wolfsburg a fighting chance but Junior Malanda fluffed their best chance of claiming a share of the spoils by inexplicably diverting wide from a yard out late on.

And Guardiola declared himself satisfied with three points to kick off the defence of Bayern's league title.

"For all coaches in the world, a win is the most important thing," he said.

"I am generally very, very satisfied. We have fought well.

"In the second half, Wolfsburg were better. We must not forget that we have played against one of the best teams in the league.

"The victory is important for the head."

And Muller, who was part of Germany's World Cup-winning squad along with a number of Bayern team-mates, insisted a bit of rustiness was understandable on the opening day of the season.

"In some phases we played really good football," he stressed.

"It is clear that at the beginning of the season not everything runs smoothly.

"[But] we can not only play good football, we are also fighters."