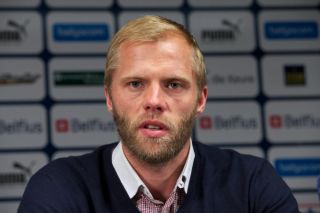 The Icelandic forward first represented the Championship side between 1998 and 2000 and has been training with the club in recent weeks to maintain his fitness following his release from Club Brugge.

Gudjohnsen, who is able to sign outside of the transfer window because he is a free agent, made 77 appearances for the club during his first spell, scoring 27 goals.

The 36-year-old departed the club for Stamford Bridge early in the 2000-01 season and enjoyed huge success at Chelsea, winning the Premier League twice and the League Cup in 2005.

A switch to Spanish giants Barcelona followed ahead of the 2006-07 campaign and he added La Liga, Copa del Rey and UEFA Champions League medals to his haul.

Stints at the likes of Monaco, Tottenham, Stoke City and Fulham followed before his spell in Belgium.

Gudjohnsen will now link up with Neil Lennon's side subject to international clearance and will try to help the club improve on their current league position of 18th.