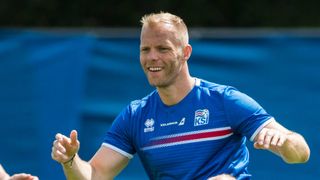 Former Chelsea and Barcelona star Eidur Gudjohnsen has offered his services to Chapecoense, saying he would love to play alongside Ronaldinho again.

Ronaldinho has been among a string of big names to offer their services to the Brazilian club, who tragically had players, backroom staff and officials among the 71 people to lose their lives when a flight carrying them to their Copa Sudamericana final first leg against Atletico Nacional went down in Cerro Gordo, La Union in Colombia.

Gudjohnsen, 38, has added his name to the list of those willing to represent Chapecoense, adding that a reunion with his former Barca team-mate would be an added bonus.

Along with the hashtag #ForcaChape, Gudjohnsen posted on Twitter: "Out of respect I would play for Chapecoense if they have a place for me!

"If not just to play with Ronaldinho again."

Gudjohnsen was last on the books of Pune City, but missed the Indian Super League season through injury.

Out of respect i would play for if they have a place for me! If not just to play with again December 4, 2016