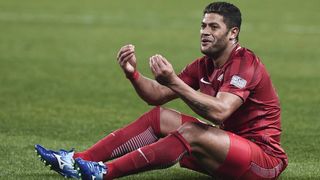 Guizhou Zhicheng called on Shanghai SIPG to publish evidence and "let the truth be known" after allegations Hulk punched a staff member on Saturday.

Li Bing, the outgoing coach of Guizhou, accused Hulk of punching assistant Yu Ming in the tunnel during Shanghai's 3-0 win.

Shanghai SIPG and Hulk have denied the incident, but in a statement on Monday, Guizhou called for action.

"We earnestly request that a higher authority take this matter seriously," the statement read.

"We also hope that relevant departments, Shanghai sporting event management and Shanghai SIPG FC would handle the case in a fair and impartial manner, publish the evidence and let the truth be known."

Hulk scored in the second half of his team's win, their fifth in eight Chinese Super League (CSL) games as they kept the pressure on leaders Guangzhou Evergrande Taobao.

On Sunday, the Brazilian had denied claims he was involved in an altercation with Yu.

"Unfortunately they [Guizhou Zhicheng] are trying to abuse my image. The coach of the adversary team is accusing me of aggression. Where did he see it?" Hulk wrote on Weibo.

"I didn't behave violently in any way! I have my conscience clear. God knows it. I just want to do what I love most - is to play football!

"I'm very happy in China. I like and respect all of the Chinese people."

Li, who is going to be replaced by Spanish coach Gregorio Manzano, had said Hulk "punched our assistant coach Yu Ming and caused him to fall to the ground" after an argument in the tunnel.