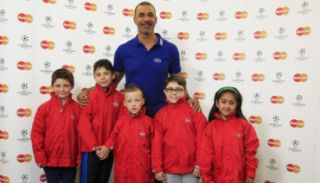 The Dutch legend, who won two European Cups with AC Milan in 1989 and 1990, says there is not much between the two sides, but he expects Jurgen Klopp's men to consign Bayern to a second successive final defeat.

"I think it's going to be a surprise and Dortmund will win. Dortmund have nothing to lose. This will spur them on, Dortmund will use that," Gullit told FourFourTwo.com

"There will be a lot of pressure at Bayern, because they lost the final last year. That will be on their mind because they were better then Chelsea last year, but they couldn't win it. That's football. And of course [Bayern boss Jupp] Heynckes will want to finish with a bang.

"We don't know if this is the last chance for Dortmund. [Mario] Gotze is off, [Robert] Lewandowski is not going to renew his contract, but they have great football players. They will all have to do it all over again with their own youth, and it will take some time."

Speaking at a MasterCard event alongside the player mascots, proud Dutchman Gullit professed to enjoying watching both German outfits.

"I like both teams. The styles aren't that much different. The only difference with them is that Bayern play more on the flanks with [Arjen] Robben and [Franck] Ribery. Their wingers are stronger, but Dortmund has a great middle of the park.

"If I was to pick a team to play for, I would pick the underdog. Not because I don't like Bayern, I love Bayern, but I like to always play for the underdogs. I have always chosen clubs that haven't won things for a long time."

Talk of the first-ever all-German final has inevitably centred around a possible sea-change in European football.

With Bayern dominating Barcelona to reach Wembley, and Dortmund beating Real Madrid over two legs in the semi-final, the prevailing Spanish dominance seems to have given way to a Bundesliga-driven way of thinking – be it dominant clubs and players, ways of treating supporters, or styles of play. Gullit welcomes the transition.

"It's a good change. In Germany, the competition is healthy, they use young players, so all the ingredients are there, and they play good football."

And knowing what it takes to win the biggest prize European football has to offer, Gullit knows what the players will be feeling ahead of the game.

"There's tension, you know it's something very important, and you only get one chance so you will be very focused. It'll be a long day.

"I've been to the new Wembley once before, to see Chelsea when they won the FA Cup, but I don't know… it's a wonderful stadium, but I don't have the same feeling that I had with the twin towers.

"I think the Champions League is great. There's amazing tension in the matches."

MasterCard ambassador Ruud Gullit was revealing some of the children who are set to enjoy a Priceless Experience as the official Player Mascots for the UEFA Champions League Final Wembley 2013 –  visit www.priceless.com