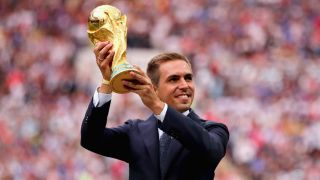 Former Germany international Dietmar Hamann described Philipp Lahm's comments about Joachim Low's management of the national team as "disrespectful and presumptuous" and suggested the Bayern Munich great "has his eye" on coaching Die Mannschaft himself.

Lahm urged Low to "establish a culture of stricter, clearer decisions" in an article published on LinkedIn, calling for "tighter leadership" to help Germany recapture the success of his time as a player.

The former Bayern Munich defender, who captained Germany to the World Cup in 2014 under Low, said the coach would need to change his "collegial leadership style of recent years if he wants to succeed again", but Hamann said he suspected ulterior motives were behind the article.

"To tell him what he has to do, I consider it disrespectful and presumptuous," Hamann told Sky Sports, pointing out that Low helped Lahm's development into one of Germany's standout players between 2006 and 2014.

After four years, it was time to say goodbye to the World Cup trophy. Congratulations to the new World Champions France and to Croatia for playing a strong World Championship! July 15, 2018

"I think the statements are inappropriate. On the one hand, because the national coach will probably go down in history as the most successful coach of the DFB, on the other hand, he was the one who put Philipp Lahm in the central midfield, where he wanted to play.

"I do not think that's the way to go if you've worked successfully with someone for ten years. I also believe that Jogi Low had a lot of influence on the career that Lahm has made in the national team and Bayern."

Low made a statement in the aftermath of Germany's disappointing showing at the World Cup in Russia, where they were knocked out at the group stage, saying he would continue in his role and thanked the DFB for its confidence in him.

When asked whether he thought Lahm had an eye on becoming the national team coach, Hamann said: "The timing would at least suggest that [Lahm] has his eye on something, but I don't want to presume anything."