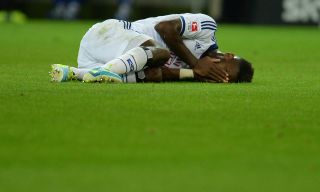 The 26-year-old - who is on loan from Premier League club Arsenal - has already become a regular fixture for the Bundesliga side, starting seven of the club's opening 10 league matches.

But after being forced off the field after just 22 minutes in their 3-0 victory over Freiburg last Sunday, the club have revealed that he faces a few weeks out.

A scan on Monday showed the tear to the muscle, with the club confirming via their official website that he will definitely miss the match against Borussia Monchengladbach next Saturday.

The news comes as quite a blow to Hamburg, who have had a fairly shaky start to the new season with four early losses seeing them currently sat in 12th place in the table.

Going into their match against Gladbach, however, they have a four-match unbeaten run in the competition that they will be hoping to build on.