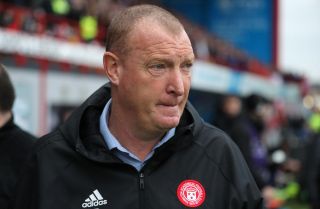 The suspended ban is in place until the end of next season and will not be invoked on the condition that Rice regularly attends recovery meetings, does not gamble on football and his club submit a certificate each month stating that he has not gambled.

The 56-year-old admitted breaking the SFA’s zero tolerance rules on betting on football matches in each of the past five seasons.

Rice had reported himself after his “horrible” gambling addiction resurfaced and spoke honestly about his problem.

Speaking outside Hampden, Rice said: “I’m relieved it’s over. It was a fair hearing. I deserve my punishment. I’ll serve it and then it’s back to football matters.

“It’s a big weight off my shoulders. I’ve let a lot of people down. But I’ve handed myself in, I’ve been honest to myself and honest to everybody. I’ll move forward now.

“I feel this is a new start for me as a person. Hopefully that will reflect on what I can do at Hamilton Academical.

“I hope (my situation) can help anyone. I’ve had lots and lots of letters and emails of support and also from people saying it’s given them the strength and the courage to own up to their own faults and addictions.

“If it’s helped one person it’s been worthwhile.”

An SFA statement read: “The period of suspension selected reflects the gravity of the breach of the rule involving the large number of low value bets.

“The tribunal chose to suspend one half of the sanction to reflect the genuine efforts it considered Mr Rice has made to ‘put his life and that of his family back together again’, and to take account of his genuine expression of remorse for his breach of the rule and the effect that has had on his family, the club and the Scottish FA.

“It is the hope of the tribunal that the suspended element will not be imposed but will play some part in helping Mr Rice to avoid returning to the practice, which has so blighted his life.”

Hamilton chief executive Colin McGowan said: “The independent panel and the officers who presided over it were very good and very fair. We got a real fair hearing with all the mitigating circumstances taken into account.

“I think it’s a good day for all. The panel praised Brian for his honesty in coming forward. That played a big factor in the ruling.”