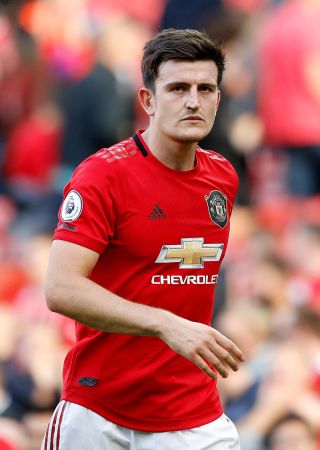 Harry Maguire believes he can contribute at both ends of the pitch and improve his leadership qualities for Manchester United.

The 26-year-old defender has yet to score for United since his £80million move to Old Trafford in the summer and was annoyed with himself for missing a good chance to equalise in last week’s defeat at West Ham.

“I see myself as a threat,” Maguire told United Review, the club’s official matchday programme, ahead of Monday’s game against Arsenal.

“I’ve had a couple of headers this year up to now and I’m sure to get on the end of many more crosses and create chances in the box. It’s something I take pride in as I work on it on the training pitch.

“I like to say I’ll chip in with some goals to help the team out in terms of getting some good results.”

United manager Ole Gunnar Solskjaer admits he is already thinking of Maguire as a future captain of the side, but Maguire feels he needs to become more of a vocal presence on the pitch before that can happen.

“It’s something I still want to improve on, my leadership qualities on the pitch and especially my talking,” he added. “I want to demand more from the players, demand standards, but I’m obviously not concentrating on that at the moment.

“I am fully focused on improving the team and getting this club back to where it should be.”

One part of his game Maguire will not be changing is his willingness to bring the ball out from the back and link play with the midfield and forwards.

“I definitely feel like it’s the modern game, bringing it out from the back and it’s something I do thrive on,” Maguire added.

“I want to step in and help the team going forward by starting attacks well and threading balls through the lines, to try and get people on the half-turn to play forward.

“I think it’s a big part of the game now, for centre-backs not just to defend, but to have a big part in keeping the ball, controlling the game and starting attacks.

“It will improve and I’m sure I’ll improve throughout the season, playing with my team-mates more and improving my relationship with Vic (Victor Lindelof). We will improve as a team as well and we’ve got to improve.”

United’s defeat at West Ham means they have taken just eight points from their first six Premier League games of the season and they needed penalties to see off League One Rochdale in the Carabao Cup third round in midweek.