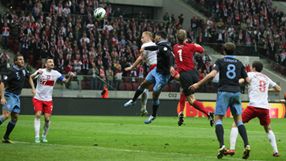 Wayne Rooney's header via his shoulder from a Steven Gerrard corner just after the half-hour mark put England ahead. However, defender Kamil Glik levelled for the Poles when he also headed home a corner with 20 minutes remaining.

"It's my fault. That's cost us three points," England goalkeeper Joe Hart told ITV television after failing to get any contact on Ludovic Obraniak's corner which was nodded in by Glik.

England, who stretched their unbeaten run against Poland to 15 matches since 1973, top the group on eight points from four matches, with Montenegro second on seven having played a game less and Poland third on five from three.

England are also unbeaten in 11 matches under Roy Hodgson, in charge since May.

"It's a decent point but we know we can play better than that. I believe this point will be a good one at the end of the day, I don't think any team will get maximum points here," said England captain Gerrard.

The match had been scheduled for Tuesday but was postponed due to a waterlogged pitch when officials failed to close the national stadium's roof despite a heavy rainstorm, angering thousands of fans who were kept in the arena for hours.

Earlier on Wednesday, the England players and the FA said they would reimburse the ticket costs for supporters who stayed on for the match while the Polish FA said it would set up a refund process for those unable to attend.

"The fans were outstanding staying an extra day. Their fans were great coming too. We made something good out of it," said Hart.

Players in the warm-up were visibly anxious about the sodden surface and the pitch cut up during the match, making fluent football difficult.

Poland started the brighter of the two sides in their customary high-octane fashion seen during Euro 2012 and Hart had to be alert to keep the scores level in the early stages, watching on as a fizzing Robert Lewandowski shot flew across his goalmouth.

Rooney's goal came against the run of play and not much changed in the second half for England, right-back Glen Johnson diverting an early opening after a fluffed clearance by Phil Jagielka.

Hart tipped over an Obraniak shot a few minutes later as Poland probed to inflict a first defeat on the former World Cup winners in nearly 40 years.

Rooney spurned a good chance for 2-0 with just over 20 minutes remaining when he was set up by Danny Welbeck on his left foot from close range. Moments later Poland were level.

The expected onslaught in the wake of Glik's goal never materialised however and the largely lifeless match drew to a close.

"I feel disappointed. We had a chance. We could have won. But congratulations are in order to the team anyway," said Polish captain Jakub Blaszczykowski who missed the game through injury.

England manager Roy Hodgson said he and the team were happy to leave Poland with their unbeaten run intact and qualifying chances for Brazil in good shape after the longer-than-expected stay.