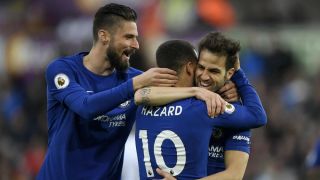 There is no doubt in Cesc Fabregas' mind that Eden Hazard is Chelsea's best player and the club must do their utmost to ward off reported interest from Real Madrid.

Hazard was one of the standout performers at the World Cup with Belgium, winning the Silver Ball as the second-best player in Russia, even if he was not included in FIFA's official Fan Dream Team.

His displays have reportedly seen him emerge as one of Madrid's key targets to replace Cristiano Ronaldo, after his shock €100million move to Juventus.

Following the departure of Antonio Conte and appointment of Maurizio Sarri as coach, Chelsea are in a state of flux, but Fabregas is adamant Hazard is the one player they must keep.

When asked at a news conference whether he has spoken to Hazard, Fabregas said: "I won't lie, I speak to him often.

"He is the best player at the club and we need a Chelsea to keep the best players. He knows the fans love him and a player we love to play with. For sure, we want him to stay."

Friday also saw the release of Chelsea's new away kit and Hazard features prominently in the marketing, a sign which will likely boost the confidence of some fans that he will ultimately remain at the club.

The former Lille star cast doubt on his future when he said he was considering "something different" after Belgium's 2-0 win over England in the World Cup third-place play-off.