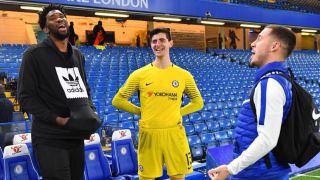 Joel Embiid and NBA franchise the Philadelphia 76ers were in attendance for Chelsea's EFL Cup semi-final clash with rivals Arsenal.

The 76ers are in London preparing for Thursday's NBA showpiece against the Boston Celtics at the O2 Arena.

Philadelphia have been busy taking in the sights of the capital city, meeting Premier League side Crystal Palace.

Fresh off of arriving in London, had a surprise meeting his childhood hero and legend .  January 10, 2018