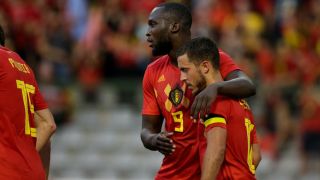 Eden Hazard is desperate for Belgium to live up to expectations at the World Cup and not underachieve like England's so-called "golden generation".

The 2018 World Cup in Russia will be the third successive international tournament Belgium have qualified for after Brazil 2014 and Euro 2016, reaching the last eight on both occasions.

But Belgium went to each of those competitions with a formidable squad and, despite reaching the quarter-finals, they hardly made a lasting impression.

Parallels can be drawn with the England team which achieved little between the years of 2002 and 2010, even with a collection of players including Paul Scholes, Wayne Rooney, Steven Gerrard, David Beckham, John Terry, Frank Lampard and more.

Hazard is fully aware of that England side's failures and is desperate – much like the rest of his country – to win something with Belgium's "golden generation".

"We know what we are," Hazard told reporters. "We are good players, we all play in the big games in England, in Italy and in Spain, so we know what to do.

"The golden generation you had in England, 10 years or 15 years ago, won nothing. Now I think the fans, journalists, all of Belgium, the country just wants to win something.

"We have a golden generation. We are in preparation, but we will be ready for the World Cup."

The England team Belgium will come up against in their final Group G game in Russia is one that has rather more modest expectations than in many previous tournaments, but, having played against most of Gareth Southgate's players, Hazard knows what they are capable of and is ready for a physical encounter.

"Now it's different", the Chelsea star said. "I think we are quite the same.

"After two minutes I am in the game - I like to be kicked. I am used to that in England, it is something I know.

"I am a leader on the pitch but, in this [Belgium] team, we have a lot of players who can talk. I am not the only captain."