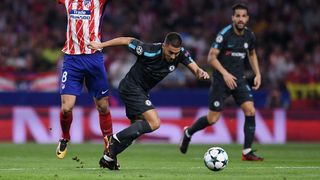 Belgium star Hazard dazzled on his return to the Chelsea starting line-up and Antonio Conte's side showed character and composure in abundance as they came from behind to triumph 2-1 and ruin Atleti's maiden European outing at the Wanda Metropolitano.

Antoine Griezmann put the hosts in front against the run of play with a 40th-minute penalty but Alvaro Morata levelled before the hour in front of the watching Diego Costa.

And up in the stands, Costa – who finalised his return to Atletico from Chelsea on Tuesday – was ashen faced when substitute Batshuayi pounced with the final kick of the match

"We are very confident, trust me. But also, Man City are very good so it is going to be a good game on Saturday," Hazard told BT Sport when asked about the Stamford Bridge showdown with Pep Guardiola's league leaders.

"Two great teams, two great managers, with a lot of good players on the pitch, so we will see.

"We want to play these types of games. We play for Chelsea, one of the biggest clubs in the world and we want to win every game."

Conte voiced his frustration over Chelsea's relative lack of preparation time to face City – Guardiola's side overcame Shakhtar Donetsk at home in their own Tuesday Champions League assignment.

But speaking to BT Sport, he found time to praise Hazard, who linked majestically with Morata on their first start together.

"We must be very happy because I think Eden's performance was amazing," he said of the attacker, who sustained a broken ankle while on international duty with Belgium in June.

"It was the first big game for him after the bad injury and I think his answer was fantastic, positive and he had a great link with Alvaro."

Morata has seven goals in all competitions for Chelsea after joining from Real Madrid as Costa's replacement and is relishing the link-up with Hazard.

"It's easy to play with a player like Eden," he told BT Sport. "He is one of the best in Europe and I am very lucky to play with Eden.

"I'm happy [with my form] but the most important thing is to win the games, win the three points always, as much as possible."