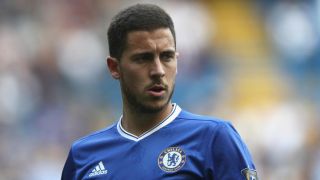 Chelsea star Eden Hazard has vowed to recapture the form that saw him crowned PFA Player of the Year and the FWA Footballer of the Year in 2015 after a hugely disappointing season last time out.

Much like his team, Hazard went from hero to zero last season, as they put in the worst title defence seen in the Premier League era, having won the title the season prior under Jose Mourinho.

Hazard in particular was brilliant during that season, scoring 19 goals and assisting another 13 in 52 appearances across all competitions, compared to just six goals and eight assists in 43 appearances last season.

The recent Euro 2016 tournament in France also proved a disappointing outing for Hazard, as he and Belgium crashed out at the quarter-final stage to Wales.

But ahead of a new season, Hazard has his sights set on reclaiming his crown as the best player in England.

"I want to be the best, like I was two years ago," said Hazard. "I want to win the same awards.

"We've got to show to everybody we are Chelsea, we're big players, we're a big team.

"We didn't finish in a good place last season. We want to forget it. We want to do better and win the Premier League. We need to do this.

"This season is important and I am ready."

"I think it was because I was tired. It is easy to look back and say now I was tired. Last season was difficult.

"I was injured. Not a big one, but it was not easy to play with a small injury, especially in England because the game is very difficult. Now it's finished. I hope.

"After a season like this, I wanted to stay at Chelsea. I didn't want to finish like this.

"When I was in France [playing for Lille] I scored a hat-trick in my final game and was a good time to leave.

"If I must leave Chelsea one day, I hope I can finish well and be a champion again."