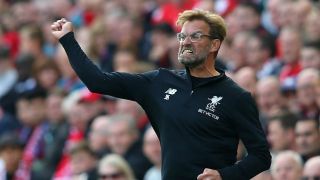 Jurgen Klopp is the right man to lead Liverpool forward, according to club great Kevin Keegan.

The German manager has come under fire after an indifferent start to the season by Liverpool, who sit seventh in the Premier League.

Klopp has been in charge at Anfield since late 2015 but is yet to deliver a trophy, and familiar defensive problems have haunted his side so far this campaign.

But Keegan, who won three league titles and a European Cup with Liverpool in the 1970s, backed Klopp, saying the former Borussia Dortmund coach was the right man for the club.

"I think he's a great manager. He fits Liverpool, he gets Liverpool,'' he said at an Aspire Academy event.

Keegan added: "They are conceding goals and they say it's a bit like my [Newcastle] team, but at Liverpool fans want to see a good game of football and they want the team to have a go.

"I think Klopp is the hand-in-glove type guy. You can understand what he is saying, he doesn't talk in riddles, he says what he thinks.

"I hope they have patience with him if it doesn't actually go quite right because he is the right guy.''

Only Crystal Palace (17) and West Ham (13) have conceded more goals than Liverpool (12) in the Premier League through seven games this season.

Keegan believes defending is a problem for several teams in England, although the top two in Manchester City and United have each conceded just twice this campaign.

"There are a lot of teams in the Premier League struggling in defence. All the rules have been changed to suit attackers - yellow cards, red cards," he said.

"It's no fun being a defender. If a defender misses three tackles he's off so it's no wonder they are cautious.

"I don't think Manchester City, Manchester United or Chelsea are great defensively. It's not just a Liverpool problem."