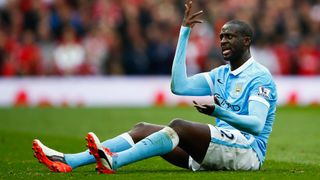 The former Barcelona star, who is captaining the team in the absence of Vincent Kompany through injury, has scored three times in his last four matches, but has faced criticism for his languid style during recent matches.

Pellegrini, though, rejects those claims and reveals his analytics show Toure, 32, stands out because he moves so much in a match.

"Yaya gives very good play to our team - he does not only score important goals," the former Real Madrid boss told reporters.

"I think he is a very important player. A lot of media criticise his body language and the way he runs, but, if you had all the statistics of Yaya after every game, he is the one player that runs more.

"He is the midfielder [playing] where there are the most amount of passes, trying to make the last and decisive pass, so I think he is very important."

City play Everton at Goodison Park on Wednesday in the first leg of their League Cup semi-final tie.

Pellegrini is still in with a chance of winning a quadruple of trophies, but he insisted fixture congestion makes that feat all but impossible for British clubs.

He continued: "It is lot of games. If you ask me I always prefer to play in all the competitions, but I am worried about the FA Cup.

"After the first rounds you start having to postpone your Premier League games to continue. I am not sure if you can continue in all the competitions.

"I think if you play the semi-final of the FA Cup and you are in semi-finals of the Champions League, then you do not have time to play one of the [league] games.