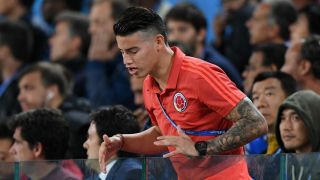 James Rodriguez could not contain his emotions after Colombia was eliminated from the World Cup by England following a dramatic penalty shoot-out.

Colombia’s captain was an injury doubt for the round of 16 fixture after being withdrawn in La Tricolor’s final group game against Senegal with a calf injury.

Rodriguez, 26, had carried the strain since earlier in the tournament, but was unable to pass a late fitness test and had to watch from the stands.

The Bayern Munich playmaker looked on nervously as Harry Kane gave England the lead on 57 minutes, but was up in celebration as Yerry Mina scored his third goal of the tournament to send the game to extra time.

Jordan Henderson’s miss in the penalty shootout looked to give Colombia the edge, but misses from Mateus Uribe and Carlos Bacca, followed by Eric Dier’s winner put England into the quarter-finals.

Rodriguez looked dejected at full time, sitting alone on the bench, and later took to social media to post a picture of himself crying.

It was a second heartbreaking World Cup elimination in a row for Colombia’s talisman after they were eliminated by Brazil four years earlier.