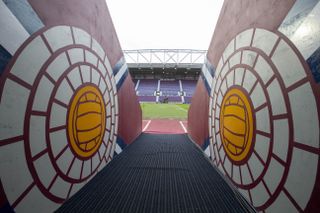 Hearts have finalised an agreement to cut wages of their full playing squad.

Owner Ann Budge had threatened to suspend salary payments entirely if players did not accept reduced wages to help the club manage the impact of the coronavirus crisis.

A club statement read: “We are delighted to have reached an agreement on temporary salary changes with the entire playing squad.

“This agreement is essential to help the club manage the impact of Covid-19 on Scottish football, which has seen the suspension of our game.

“This commitment from all of our players, backroom team and off-field staff, which will help to maintain the long-term sustainability of the club, is hugely appreciated and we thank everyone for their continued support.

“The majority of the squad are on furlough leave, with a couple of exceptions due to ongoing treatment for injury, and will continue to maintain their fitness at home.”

Skipper Steven Naismith had offered to take a 50 per cent wage cut in late March and manager Daniel Stendel has been working for nothing along with an unnamed young player, but Budge had struggled to secure widespread agreement with the playing squad.

She gave a clear indication on April 24 that she was prepared to invoke a clause, which is standard in Scottish Professional Football League contracts, which allow clubs to cancel payments if football is suspended for any reason.

Budge earlier stated that no player had been asked to accept a wage reduction of more than 30 per cent with the majority of cuts falling below that mark.