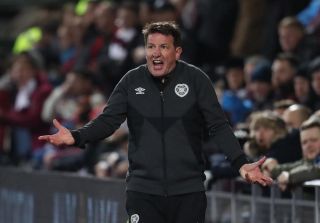 Daniel Stendel believes Hearts should head into Wednesday’s game against Celtic with renewed confidence after seeing off Falkirk to reach the Scottish Cup quarter-finals.

The Tynecastle side had to battle difficult weather conditions as Storm Ciara battered the Falkirk Stadium on Saturday night and also had to withstand a spirited display from their third-tier hosts to emerge with a badly-needed win.

The positivity of the recent success against Rangers has slipped away after the 3-3 draw with St Johnstone and the 3-2 defeat at home to Kilmarnock – and the Premiership’s bottom side are firmly in a relegation battle.

However, they brushed aside their league worries to progress in the cup courtesy of Sean Clare’s penalty early in the second half.

And Hearts boss Stendel said: “In a cup game, we know against a lower team, when the weather is not good, the one and only thing that counts is the win.

“You can see that, for us, the punch on Wednesday (defeat to Kilmarnock) was hard and we needed a little bit of time.

“But we won this game and it will help us for the next few games.

“Wednesday is a difficult game against Celtic but we won against Rangers. Why not at Celtic?

“The result (against Falkirk) in all the circumstances gives us confidence and the little bit of a lift that we needed after the last result.

“It was important we won. The players are happy and they can be happy because it wasn’t so easy to win, but we won.”

Hearts’ breakthrough came just five minutes after the interval after Michael Doyle nudged over Liam Boyce in the box as they chased a long, wind-assisted clearance from goalkeeper Joel Pereira.

Falkirk’s Declan McManus hit the same post twice and when a drive from Bairns midfielder Gary Miller then came back off the crossbar, it was clear it was not going to be the League One side’s night.

Falkirk co-manager David McCracken said: “We’ve got some massive games coming up and we’ve got to take the positives out of this and take them into the league games.”