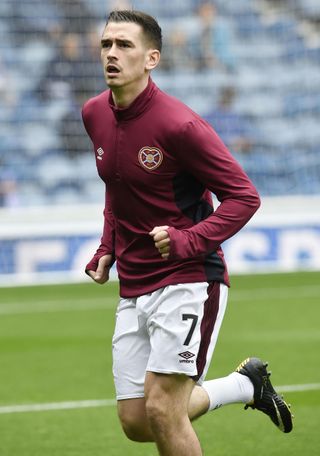 Hearts manager Craig Levein can see “green shots of recovery” in their season.

Levein’s side have ground out draws against Rangers and Livingston since he heavily criticised his players in the wake of a home defeat by Kilmarnock.

Hearts have only won one of their 10 Ladbrokes Premiership games ahead of facing bottom club St Johnstone at McDiarmid Park on Wednesday.

But Levein is encouraged by a contracting injury list with the likes of Jamie Walker and Steven Naismith back in training.

Levein said: “We have put in two really competitive performances on the back of the Kilmarnock game when I felt we weren’t at it.

“My reason for getting a little bit happier is Jamie Walker and Naisy have a history of scoring double figure goals in the Premiership and they are nearly back.

“Obviously I don’t expect them to go from being injured to scoring hat-tricks every week but it will feel much more comfortable for me and the rest of the team to have people at the top end of the pitch who can score.

“We are starting to see the green shoots of recovery, I hope.”

Naismith has barely played this season because of hamstring problems while Walker suffered a leg fracture on August 16.

“Glenn (Whelan)’s feeling much better as well, so there’s a chance he could be on the bench as well. Loic (Damour) is injury-free and available, which is good.

“Aidy White is available – he had concussion after the Rangers game as well, so he missed the game at the weekend.

“There’s four that are not going into the starting line-up obviously, but it’s good to see that they’re starting to appear on the team sheet.”

On Wednesday’s challenge, Levein said: “It’s a while since we have managed to get a victory up in Perth so we will need another strong performance and hopefully we can come back with three points.”