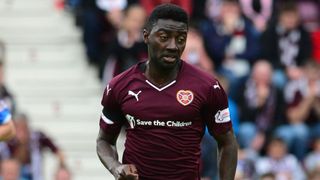 A 0-0 draw in the away leg had put the Scottish Premier League club in control of the second qualifying round tie, but Birkirkara goalkeeper Miroslav Kopric saved Buaben's first-half spot-kick.

Christian Bubalovic and Edward Herrera then struck in the second half and, although Conor Sammon grabbed one back for the hosts, Birkirkara held on to secure a memorable scalp.

Birkirkara, who were beaten on penalties by West Ham in last year's Europa League, have never before reached the third qualifying round of the tournament.

It was a bad night all round for Edinburgh clubs as Hearts' local rivals Hibernian also exited the Europa League at the second qualifying round, going out 5-3 on penalties to Danish team Brondby.

Captain David Gray levelled the tie after Hibs lost the first leg 1-0, but it was heartbreak for Neil Lennon's side as John McGinn missed his spot-kick and Brondby converted all of their penalties to win the shoot-out.