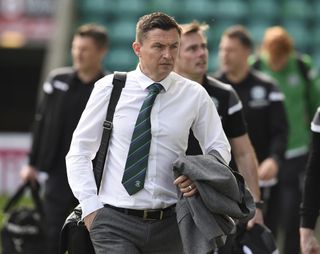 Paul Heckingbottom accused Kilmarnock defender Alex Bruce of diving on his way into his post-match media conference but the Hibernian head coach admitted his side’s “rubbish” performance was the reason for their defeat at Rugby Park.

Hibs fell to a 1-0 loss courtesy of Eamonn Brophy’s 32nd-minute penalty after referee Andrew Dallas ruled David Gray had fouled Bruce as the pair ended up on the floor as they challenged at a corner.

Heckingbottom made his feelings clear towards Bruce as he walked past his former Sheffield Wednesday team-mate into the media room, repeating the diving accusation after being asked by the centre-back if he was serious.

When asked for his opinion on the penalty, Heckingbottom said: “You can see it’s soft. Alex has got the contact and gone down and the ref has given the penalty. I don’t know what was said before, the referee might have been watching from corners before.

“But we are not going to rely on referees to win us the game. It’s down to us, we were rubbish, that’s why we didn’t win the game.”

Hibs’ chances of a top-four finish had ended six days earlier with defeat against Rangers, their first Ladbrokes Premiership loss under Heckingbottom, but he expected a lot more from his players.

“A team with nothing to play for against a hungry team, loads of people had that result down on their accumulator but you want to put in a performance where you win, but that was a typical end-of-season performance,” he said.

“It would have been harsh on Killie not to take three points.”

Kilmarnock’s win took them back above Aberdeen on goal difference into third place with one game left to play.

With a six-goal advantage, Kilmarnock’s fate is in their own hands ahead of the visit to Rangers, while Aberdeen complete their season at Easter Road.

Manager Steve Clarke said: “It’s nice to be in the position we are in but tough game next week and we’ll see what happens.

“We have to match Aberdeen’s result. That would give us third, which would be a tremendous achievement.

“But we have already achieved this season, so we go in next week with no pressure on us and we try to finish the job that all those supporters want us to finish.

“We should have made it a less stressful last 10 minutes for them, we should have put the game to bed but missed three or four opportunities, one in particular that Eamonn would normally score. That made it a little bit more difficult than it should have been.”