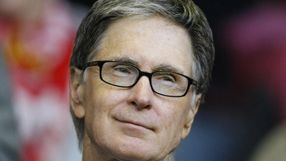 The American, who took over the Premier League club last month, was similarly non-committal about plans for a new ground, saying it could take another two years before the Merseyside club decided whether to build a new stadium or expand Anfield.

Asked if Hodgson, under pressure after a poor start to the season, was the right man for the job, Henry told Sky Sports News: "He certainly is at this point.

"I can't make any promises about the future for anything in the organisation because two months ago I didn't know that much about English football," added Henry, whose New England Sports Ventures (NESV) also owns baseball's Boston Red Sox.

"We tend to stay with our managers and our general managers. Roy didn't build this team so I think he has been unfairly criticised this year.

"I think it is my role at this point to support him in every way, to make sure he has the resources to accomplish what he wants to accomplish. There is no change that is imminent."

He promised investment in the squad but did not give any clue as to how much money Hodgson, at Anfield since July, might have to spend in the next transfer window.

Decisions on buying players would be taken collectively by the manager, new director of football strategy Damien Comolli and the board, Henry said.

"We need to invest in this team," he said, adding that Liverpool were well placed to compete financially with the top clubs but needed "to work on the football side".

"Our long term objectives are to be able to compete... with Arsenal, Manchester United and Chelsea. We have to be able to be competitive with them at the top of the league every year," he said.

He said the introduction of financial fair play rules next year, which encourage clubs to live within their means, meant Liverpool would need to increase their revenue to buy players.

"You cannot sustain a club for the long term by borrowing to buy players," he said. "It means we have to create revenues worldwide.

"Obviously, if you build a stadium there is debt involved in that - even Arsenal had to borrow to build Emirates."

A decision on whether to build a new ground was some way off though, with Henry saying it took three years to decide what to do about the Red Sox's stadium when he first took over.

"Hopefully, within a couple of years, we'll have a decision on which way we're going to go," he said. "But I don't want to set a hard-fast time limit on when we make that decision."

His refusal to hurry was in contrast to the previous owners, with former co-owner George Gillett promising work on a stadium would start within 60 days of his and Tom Hicks's 2007 takeover.