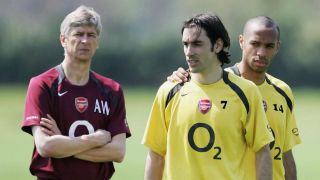 Thierry Henry could be the man to replace Arsene Wenger when he finally leaves his role as Arsenal manager, according to Robert Pires.

Wenger arrived at Arsenal in 1996 largely unheralded, but has gone on to forge himself a reputation as one of the great modern managers.

During his 19 years at the helm, the Frenchman has guided the club to nine major honours, including the Premier League title in 2003-04 when a team including Henry and Pires went the entire league season unbeaten.

Henry is now taking his coaching badges, and Pires sees no reason why his former club and international team-mate could not succeed Wenger.

"There always have been speculations - yesterday, today and tomorrow. It's part of football and it applies to players and managers," the Grassroot Soccer ambassador told Omnisport.

"Can I see Thierry Henry taking over Arsene Wenger? Yes, why not.

"He is working on his badges. He is involved with the U19 [team] at Arsenal academy. He is preparing himself step by step. He wants to get his badges.

"Question is: would Arsenal want Thierry Henry? It depends on the board, the chairman. I can see Thierry Henry, as well as Patrick Vieira. It's up to the club to prepare well the post-Arsene era. That's crucial."

Vieira was appointed as New York City head coach earlier this week, and Pires believes the former Arsenal captain could also be in line for a return to the club at some stage in the future.

"It's a new experience and a new life for him. He will learn," Pires said. "Okay, it's MLS but you have to start your career somewhere.

"I am sure - and it's only my opinion - we will see him on Arsenal's bench.

"He was disappointed [to not be given a job at Arsenal] at first. But now he understands and respects the choice of the people at Arsenal. He hasn't written off the opportunity [of coaching Arsenal].

"He played nine years at Arsenal. He was one of the emblematic captains. He is still learning. I know him very well and I am sure that he will manage a top European team."

The funds raised by the players will be spent on a range of unique sports-based partnerships in 50 countries around the world, including a community project in South Africa and Voluntary HIV Counselling and Testing tournaments in Zimbabwe.