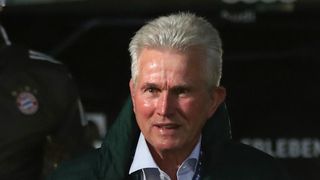 Jupp Heynckes feels Bayern Munich will finish second in Group B after his side battled to a 2-1 win away to Celtic to secure qualification into the last 16 of the Champions League on Tuesday.

A Javi Martinez header sealed a tight victory for the Bundesliga champions, who were without Robert Lewandowski and Thomas Muller due to injury, after Callum McGregor cancelled out Kingsley Coman's opener.

Bayern secured a place in the next round as a result of their victory but, after leaders Paris Saint-Germain battered Anderlecht 5-0, the French side remain three points clear at the top of Group B.

Heynckes, who has now overseen seven straight Champions League wins at Bayern across two spells, setting a club record, suggested PSG cannot be caught but was happy with his side's performance at Parkhead.

"I knew that today would be a very difficult, intensive game," Heynckes said. "We've had a busy schedule recently and have been working hard on the training pitch. But that's normal.

"I think the team played well in possession, but Celtic had phases where they attacked us aggressively and caused us problems.

"Last Saturday we had a tough game against a top side [beating RB Leipzig in the Bundesliga] and today we had another difficult game. Of course it takes a lot of energy from the players.

"It's important that we have qualified, but it's going to be difficult to finish top of the group because of our head-to-head record [losing 3-0 in Paris to PSG]."

Great stadium and outstanding atmosphere. Loved it. Hopefully till next time October 31, 2017

Celtic remain third in the group following their defeat and manager Brendan Rodgers is targeting beating Anderlecht to Europa League qualification after seeing his side's slim chances of progression end despite a spirited display.

"It's a huge step for their confidence," Rodgers said. "Apart from the two goals, defensively we were very, very good. Pressed the game well at the right moments. When we had the ball, we found the gaps and played very well.

"PSG will be a big test for us, but when we're back here [against Anderlecht on matchday six], we want to have European football after Christmas. If we can do that, it's a great measure of how the players are playing.

"The disappointment afterwards lends us to thinking of how we played and our performance level, the level and composure and quality we played with tonight.

"They're world class. We conceded two goals... you get punished at this level in particular. We look like a proper team. We're disappointed to have lost, but we're progressing as a team."