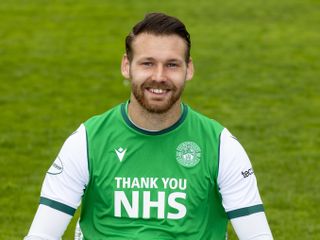 Hibernian kept up the pressure on Rangers at the top of the Scottish Premiership with a comfortable victory away to St Mirren.

Goals from Kevin Nisbet, Joe Newell and Martin Boyle proved too good for a Saints side who rarely threatened but will feel they ought to have been awarded a first-half penalty.

Jim Goodwin’s side were also without three first-team goalkeepers as a result of Covid-19 guidelines and handed a debut to Hearts’ Bobby Zlamal, signed on SAturday morning on an emergency short-term loan deal. Goalkeeping coach Jamie Langfield was listed among the substitutes.

Saints made two other changes from the team beaten away to St Johnstone. Ethan Erhahon and Kristian Dennis both started with Kyle McAllister and Junior Morias dropping to the bench.

The visitors moved in front with the first real chance of the game after 14 minutes. Paul McGinn’s cross from the right seemed to bounce off Nisbet after a deflection but that was enough to carry the ball beyond Zlamal.

Hibs moved further ahead just three minutes later. Boyle picked out an unmarked Newell on the end of the box and he swept a shot into the far corner.

It was all Hibs at this point and Josh Doig was next to threaten with a shot that was deflected for a corner.

On a rare foray forward, Saints were denied a penalty when the ball seemed to strike the arm of Hibs defender Ryan Porteous but referee Willie Collum waved away the claims.

St Mirren were then denied a goal by two terrific saves from Ofir Marciano just before half-time. The visiting goalkeeper was alert to push away Ilkay Durmus’ direct free-kick from just outside the box before reacting quickly to deny Nathan Sheron after the home side had worked another opportunity.

Zlamal made his first save of the match early in the second half to block an attempt by Nisbet before St Mirren debutant Lee Erwin – on as a half-time substitute – fired a half-volley over the crossbar.

However, any prospect of a comeback when Hibs got their third goal. Zlamal lost Newell’s cross in the air and the ball was bundled in from close range at the back post by Boyle.