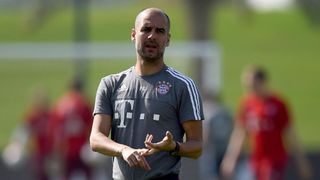 Chelsea interim manager Guus Hiddink would not be surprised to see Pep Guardiola become his successor at Stamford Bridge come the end of the season.

Hiddink was appointed as Chelsea boss until the end of the season after Jose Mourinho's departure in December amid a woeful start to their Premier League title defence.

Guardiola - who will leave Bayern Munich at the end of the season due largely to a desire to manage in England - has been tipped as a potential long-term replacement for old foe Mourinho in west London.

Manchester City and Manchester United are also reportedly interested in the former Barcelona boss, with Hiddink understanding why Guardiola wants to test himself in the Premier League.

Hiddink denied suggestions Guardiola's uncertain future was unsettling the likes of Louis van Gaal and Manuel Pellegrini, but also backed the Bayern boss to succeed in any big job.

"First of all, he is not putting pressure on other managers, we are used to that," he told reporters. "Unfortunately, I didn't work in Germany but the Bundesliga is a beautiful league.

"I worked in the Spanish league for several years and La Liga is also a beautiful league. Pep has worked in both, so I can imagine that after having worked in those two leagues, he would express a desire to go and work in the Premier League.

"I don't want to defend him - he is capable of doing that himself - but I think it is nothing more than a desire to go into one of the biggest leagues in the world.

"I don't think he is playing a game, putting pressure on other clubs or managers. I think it is an expression of desire.

"He has shown in a very fast career - from the second team in Barcelona - that he's capable of managing a team very well.

"It is difficult to say, 'Hey, you must go to a particular team in the Premier League'. I don't want to put more pressure on the [Chelsea] directors or the owner to decide. Let it happen as it happens.

"Would he fit in here? He would fit into any big club in the world."