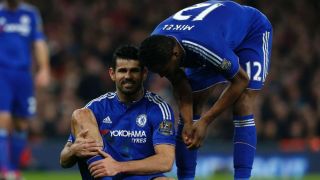 Chelsea manager Guus Hiddink has played down injury fears over Diego Costa, who was replaced in the second half of Sunday's 1-0 Premier League victory at Arsenal.

Costa was a central figure in the key moments at Emirates Stadium, first drawing the professional foul which saw Per Mertesacker sent off in the 18th minute, before netting the winning goal shortly afterwards.

The Spain striker left the action in the 68th minute with an apparent knee injury, before Chelsea held out under late pressure from the 10 men to extend their unbeaten league run over Arsenal to nine matches.

When asked about the injury, Hiddink told Sky Sports: "We'll see. We'll make some scans but I don't think it's very, very serious."

Cesc Fabregas said after the match he feels he is returning to his best form after struggling earlier in the campaign, and Hiddink was in agreement with his midfielder.

"He is strategically very strong and when you have him you can start playing football and of course he knows himself as the best," the Dutchman added.

"I'm happy when he says he's growing in his shape and that's true.

"I'm proud of the guys who performed as they did. We had a good first half and played well, second half we played okay, although we could have materialised it more than 1-0."

"We were unbeaten but it was not satisfying," Hiddink said. "This is a step to try and go on that path.

"It's a big gap. The team knows it's a big gap and I want to see the ambition of the team always there."