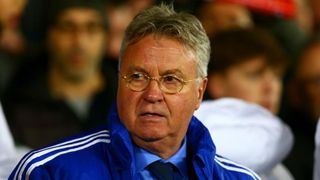 Crediting Guus Hiddink for a Chelsea revival is a "load of c**p*", according to West Brom head coach Tony Pulis.

The Dutchman took charge at Stamford Bridge in December after Jose Mourinho was sacked, leading his team on a four-match unbeaten run in all competitions.

Pulis, whose men visit Chelsea in the Premier League on Wednesday, said the reaction since the Portuguese tactician was sacked had been unfair.

"To be honest, what's been said is a load of c**p in lots of respects," he said.

"The fact Mourinho won the league by a country mile - to say someone's come in and changed it and they're playing better and doing everything else better.

"There might have been other reasons that things didn't go so well this year.

"But to put Jose down is completely and utterly out of order. It's disrespectful to Mourinho and also the players that won the league last year, because they played some great football."

Chelsea are 14th in the Premier League, two places below West Brom through 20 games this season.