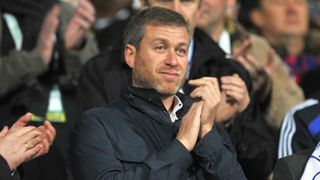 Interim Chelsea manager Guus Hiddink believes the constant presence of owner Roman Abramovich at training is a good thing for the club.

The Dutchman said it was natural for owners who make big investments in clubs to attend training and said his presence did not mean there was bad news to come for players or other staff.

"It’s rather natural but that doesn’t mean every now and then you have to make big decisions," Hiddink said.

"I like them [the owners] to feel welcome not just in the official receptions before and after games.

"Roman was here the previous week several times. We organised an under-21's game against QPR and I asked him to come. They have started to love football years ago and it’s important to be part of it. Normally when big bosses come to the training ground then there’s always a bad message. They go to punish and whatsoever.

"Every now and then it’s done in the past but also I invited my bosses, although they have the right to step in at any minute, to come because they say 'we don’t want to bother, we don’t want to come', and I said 'no it’s your and our club so feel welcome to come to ­training and watch and there’s no pressure'."

One player who might be feeling a bit of pressure in the Chelsea locker room is Eden Hazard.

The reigning Premier League Footballer of the Year has not scored a single goal this campaign, but Hiddink has told the Belgium international to focus his efforts on getting fully fit and the "beautiful times" should return.

"When getting his rhythm back, he’s of big value to Chelsea," the Dutch manager said.

"He’s a very important player to us. A nice player. He has this injury and that’s been an unstable situation for at least two months.

"He is eager to perform, but the physical fitness must be there.

"Hopefully, he is coming back to where he was before. But he needs training and game fitness, and you get that by playing games.

"For the club, beautiful times can come up for him. And on top of that there is the Euros coming up. Everyone who is a ­candidate for being a big player in the upcoming time, and then the Euros, it’s a beautiful period for them."