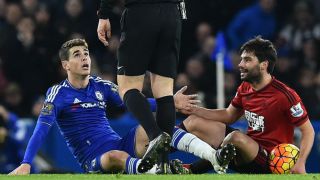 Guus Hiddink says Tony Pulis took the role of the referee when he substituted Claudio Yacob after a controversial tackle on Oscar in the second half of West Brom's 2-2 draw with Chelsea.

Argentine midfielder Yacob was on a yellow card when he stopped a Chelsea break by hauling down the Brazilian, but referee Anthony Taylor allowed him to remain on the pitch.

Pulis responded by quickly replacing the 28-year-old with Saido Berahino.

However, ejecting Yacob from the field of play is a move the Dutchman feels should have been the responsibility of the match official Anthony Taylor.

"The manager made a wise decision when he took over the role off the referee and took of Claudio Yacob. The referee forgot to do it," Hiddink told BBC Sport.

"It was twice or three times [he could have had] a yellow. I think it was a big moment. From there on we could have dominated a bit more."

The Chelsea manager was pleased that his team's unbeaten run since he took over stretched to five games with the draw, but was disappointed at missing out on three points due to James McClean's 86th-minute equaliser.

"We have to finish it off a little bit better and that's what we didn't do," he said.

"The unbeaten run goes on but we would have preferred the win. West Brom always bounce back, there is great character. It was an intense game."