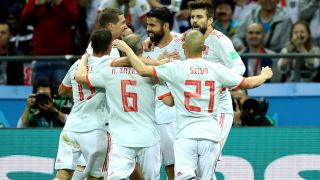 Spain coach Fernando Hierro believes his team are similar to the one that won the 2010 World Cup.

A 1-0 win over Iran saw Spain move top of Group B, putting them on track to reach the knockout stage.

The 2010 champions were considered among the hot favourites to win the tournament in Russia, although the sacking of coach Julen Lopetegui on the eve of the event led to some doubts over their chances.

Hierro, who took charge for the showpiece, said he could see similarities between his group and the successful 2010 team.

"It's a similar group, know that you can't have clones unfortunately," he told Onda Cero.

"But we have a backup group pushing for places every day. That is the only way to avoid relaxing, by having a group of team-mates that push you closer to the limit every day.

"And we have [Cesar] Azpilicueta, [Nacho] Monreal, Saul [Niguez], Koke, [Alvaro] Odriozola, Iago Aspas, Rodrigo and Thiago [Alcantara]. They don't allow the others to rest.

"It's beautiful to see them training and they can be important at any moment."

Spain only need a point against Morocco Monday to seal their spot in the last 16.