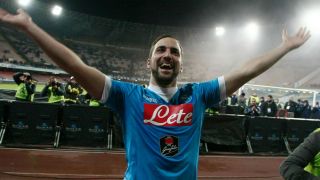 Higuain took his Serie A record for this campaign to 20 goals in 20 appearances with a double in the 3-1 win over Sassuolo on Saturday, already surpassing his previous best return in a single term at the San Paolo.

The former Real Madrid striker's goals have helped propel Napoli to the top of the table, where they sit two points clear of defending champions Juve.

Dybala, who came on as a substitute in place of Higuain in Argentina's last two World Cup 2018 qualifying matches, lauded his compatriot and suggested his goals make Maurizio Sarri's side serious contenders for a first Scudetto since 1990.

"Higuain does not surprise me at all," Dybala told La Gazzetta dello Sport. "I saw him up close in the national team, he is a phenomenon.

"I think Napoli and Inter are the most dangerous opponents. Fiorentina and Roma remain in the race, but now I believe more in Napoli.

"We are second, the road is still long, but we must not slow down."

Dybala took his tally in his debut season at Juve to 11 with a double in the 4-0 win over Udinese, putting him joint-second in the Serie A scoring charts alongside Eder .

The 22-year-old felt his opening goal at Friuli was crucial to the result: "It was nice [to score] because it opened up the game."