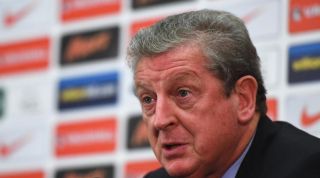 Hodgson's men strolled to a 5-0 victory over San Marino in a Group E Euro 2016 qualifier on Thursday and travel to Estonia for their next fixture on Sunday.

The ease with which England brushed San Marino aside prompted some to question the merit of playing sides of such stature, but Hodgson said it was not an issue that bothered him.

"It's a subject for people at UEFA to ponder over," he said. "I've been asked the question before and also answered that it isn't my business.

"It would create a lot of logistical and calendar problems and also there is the moral issue.

"Why should some countries be less worthy than others?

"But that's something that really doesn't bother me at the moment.

"When UEFA make a decision - if they make one - then we'll be happy to abide by it, but in the meantime we're perfectly happy to meet teams like San Marino and play against them."

England have gone unbeaten in their last two qualifying campaigns, but Hodgson shrugged off suggestions his side could win all 10 of their pre-Euro 2016 matches.

"It's hard to say if winning all 10 games is realistic," he added. "Having the goal of being unbeaten is more realistic.

"All that matters is getting to France 2016 and, when we get there, having a competitive team."