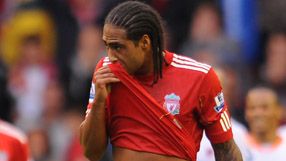 Johnson – like Liverpool – has had a poor start to the campaign, and has been told by his manager that he may not be worthy of a place for club or country if he fails to turn his season around.

Like many of his England team-mates Johnson’s season has so far been hampered by injury after he picked up a groin injury last month.

However the 26-year-old is now back in training, and while Hodgson says that, for now, if Johnson is fit he will play for Liverpool, the former Fulham boss has claimed that so far this season Johnson has failed to justify his position as England’s first choice right-back.

“The big thing with Glen Johnson is whether he is fit enough. That is the major question, rather than the selection process, because he is England’s right-back, and if he plays like an England right-back, you would expect him to get his place back,” the Liverpool manager said in the Daily Mail.

"But he would have to be playing like an England right-back for that to happen, and up to now this season, to be quite frank, he has not performed at the level you would expect. Not very often, anyway.”

The former West Ham, Chelsea and Portsmouth defender had an impressive debut season at Anfield but has failed to hit the same heights this season, leaving his manager wondering why.

“The reasons? You would have to ask him that. Perhaps you should ask him: 'Do you think you are playing at the top of your form? Do you think you are really performing like the best right-back in the country when you play for your club?' If the answer is 'yes', then we will have to agree to differ. If it is 'no', you could ask him why not,” said Hodgson.

Johnson has been put under further pressure since the impressive 20-year-old Martin Kelly put in an assured performance for Liverpool when helping his side to a 2-0 win against league leaders Chelsea.

“If you asked me if anyone has surprised me this season, Kelly would be the first name I would mention,” said Hodgson.

“Chelsea was a really tough fixture to throw him into, because they are at their best when they attack down the left, and there is many a right-back who would not relish a test like that. But he came through really well and played his part in an excellent win.”

Liverpool’s stuttering start to the season has led to criticism of a number of their players – with Danish midfielder Christian Poulsen linked with a move away from Anfield despite having only arrived from Juventus over the summer.

However, Hodgson believes that Poulsen provides an important role in terms of giving Liverpool’s omnipresent captain Steven Gerrard the freedom to go forward.

“When I sent on Poulsen for the last 15 minutes or so against Wigan, it enabled Steven Gerrard to push forward more and add a bit to our attacking endeavours," said the Anfield boss.

"It almost won the game for us, because Steven was very unlucky with a shot that came back off the underside of the bar.”