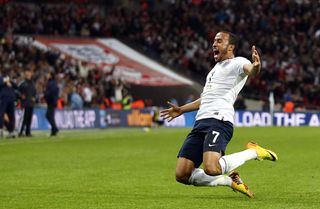 In-form Tottenham man Townsend was handed his full international debut for the crucial Group H FIFA World Cup qualifier on Friday - and he rose to the occasion.

The 22-year-old is only just establishing himself at club level, but he stole the show at Wembley as England secured a 4-1 win that leaves them needing a victory against Poland on Tuesday to qualify for Brazil 2014 automatically.

Wayne Rooney put England in front and an own goal from Branko Boskovic doubled their advantage, only for Dejan Damjanovic to throw Montenegro a lifeline when he pulled a goal back on 71 minutes.

But Townsend settled the hosts' nerves by scoring a third soon after, before Daniel Sturridge put the icing on the cake with a late penalty to edge England ever closer to qualification.

"To leave people like Jack Wilshere and James Milner out, with their experience of big games, wasn’t an easy decision.

"We’re glad it worked out well for us. I think man of the match Andros Townsend must be delighted with his evening’s work. Sometimes you're lucky with these things."

England looked set for a tense evening when they failed to score in a first half they dominated, but Hodgson was confident they would get the victory they deserved.

"I don’t think (it added pressure). I think in the first half we were dominant. It wasn’t easy to find way a past a well-drilled and organised Montenegro team. Luckily the chances came and we scored," he added.

"The 2-1 was a bit of a cold shower for us, because we had chances to go 3-0 up. But luckily Andros Townsend stepped up and got the third."