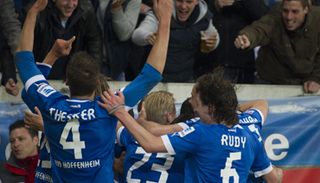 They completed a 5-2 aggregate win, having sneaked into the play-off in dramatic circumstances on the last day of the regular season with a victory that propelled them out of the automatic relegation spots.

Hoffenheim had the first chance when they were awarded a penalty only for Sejad Salihovic to see his effort turned over the bar by Tobias Sippel.

Alexander Baumjohann curled in a free-kick in the 65th minute to equalise and Mohamadou Idrissou had a goal disallowed as the hosts put Hoffenheim on the back foot.

But their hopes ended when Jannik Vestergaard headed Hoffenheim back in front in the 74th minute.

Hoffenheim had appeared doomed to the second tier when, needing a win combined with a Fortuna Dusseldorf defeat to earn a play-off place on the final day of the season, they trailed Champions League finalists Borussia Dortmund 1-0 with 15 minutes left.

But two goals in five minutes from Salihovic gave them a 2-1 win and they survived a scare when Dortmund had a goal disallowed with the last kick of the game.

Bankrolled by Dietmar Hopp, the co-founder of software giant SAP, Hoffenheim rose from amateur status in the 1990s to the third tier before winning promotion in successive seasons between 2006 and 2008.

In 2009, Hoffenheim, originally from the village of Sinsheim, moved to a new 30,000 capacity stadium, the Rhein-Neckar Arena.

Four-times German champions Kaiserslautern had been attempting to bounce back at the first attempt after their relegation last season.