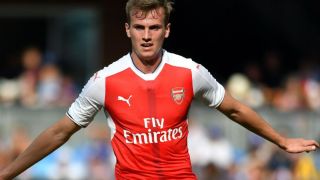 Rob Holding was thrilled to make his first appearance for Arsenal and is looking forward to showing the fans what he can do.

The defender's maiden Gunners outing since joining from Bolton Wanderers came in Thursday's 2-1 win over an MLS All-Stars team in California, which the 20-year-old described as "a bit crazy".

Holding has drawn warm praise from manager Arsene Wenger and the youngster enjoyed the experience of facing stellar names such as Andrea Pirlo and Didier Drogba.

He told the club's official website: "It was a bit crazy, especially when there was the national anthem and fireworks, I was thinking 'this is crazy'.

"But I really enjoyed it, playing against the likes of Kaka, Pirlo and Drogba was a great experience for me personally.

"I was definitely pleased with my performance. It's the first one under my belt which helps you get settled and build your way into it. Hopefully now I can show the fans what I'm about."

Wenger previously said of the England Under-21 international: "He's a young, promising centre-back. You don't find centre-backs that often and we can educate them when they're at that age. We can give them all the ingredients we think are important."