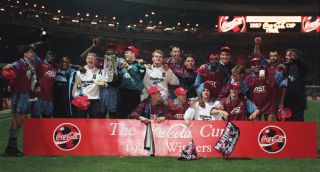 It is the ninth time Villa have reached final of the competition, lifting the trophy on five previous occasions.

Here, the PA news agency looks at the club’s previous record in the final.

Villa claimed their first League Cup crown after coming back from 2-0 down in the first leg. Alan O’Neill, Harry Burrows and Peter McParland – after extra time – struck in the second match to earn a 3-0 home win.

Villa were beaten over two legs by bitter city rivals Birmingham. They suffered a 3-1 first-leg defeat at St Andrew’s – Bobby Thompson’s late consolation not enough with Birmingham winning thanks to a Ken Leek double and Jimmy Bloomfield’s strike – before a 0-0 draw at Villa Park.

Ten years after their first appearance, Villa returned to the final but two Martin Chivers goals in the final 12 minutes gave Tottenham the cup.

Ray Graydon netted an 81st-minute winner against the Canaries for Villa, who included future League Cup-winning manager Brian Little in their side.

Villa needed two replays to finally lift the League Cup. After drawing 0-0 in the final and 1-1 in the replay, they beat Everton 3-2 at Old Trafford a month after the first meeting. Brian Little’s brace and Chris Nicholl’s goal helped them to victory after extra time.

James Milner opened the scoring from the penalty spot, although Villa felt Nemanja Vidic should have been sent off when he took down Gabriel Agbonlahor for the penalty, but Michael Owen and Wayne Rooney hit back to clinch the cup for United.